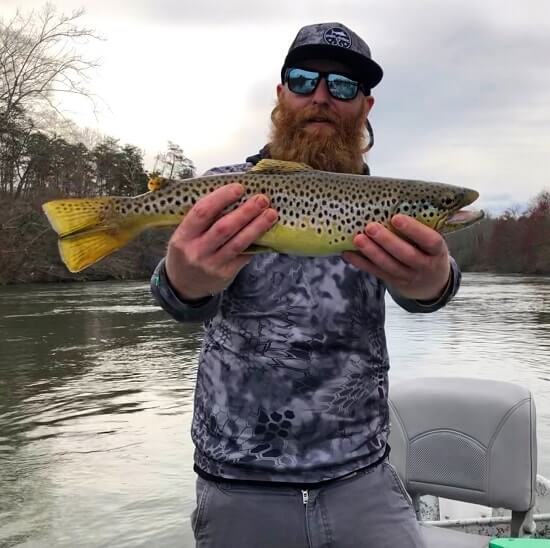 The ecological history of trout in Western North Carolina has created a relatively diverse fishery as it stands today here in the mountains.  Our waterways currently hold four primary species of trout: brook trout, brown trout, rainbow trout, and tiger trout. These can be further broken down into subcategories of these fish species.  Through much misinformation, however, there has been a lack of classification between these species and their sub-classes. Here, I’ll try to differentiate between what trout species are wild, native, and stocked here in North Carolina.

For brook trout, we have Northern Strain (stocked brook trout) found in Northern watersheds on the Eastern Seaboard, and Southern Appalachian Speckled Trout (if you call it anything other than a “Speck”, it’s blasphemy). The Southern Appalachian Speckled Trout is the only salmonid species that is native to the mountains of Western North Carolina.  The term “native” describes a species that was present, at least in our case, before European Settlement.  Southern Appalachian Speckled Trout populations have declined since the late 1800’s due to the over extraction of our forests from industrial needs and the Chestnut Blight in the early 1900’s (I’ll detail this in my next article), as well as from threats of development, habitat loss, encroachment of other trout species, and over fishing today.  Northern Strain Brook Trout are what the NCWRC stocks, and can be found in various streams across the state with hatchery stockings.

Rainbow trout and brown trout are the predominant salmonid species across the state, and can be found in their wild versions as well as stocked. Here is where people miscatagorize the terms “wild” and “native” species of trout. A wild trout was born and bred in the stream during its lifetime. A native species of trout has a distinct ecological history that spans before European settlement within a given watershed.  Rainbow trout in their various subcategories are predominantly native to the Western side of the Continental Divide of the Rockies and even parts of Russia. Brown trout are native to Europe and parts of Asia; and can also be divided into two strains that we have in the mountains: “German Browns” and “Scottish Browns.”

German Browns are categorized by having pronounced red dots along the sides of wild specimens, while Scottish Browns are descendent of Brown Trout that are found in the British Isles, lacking in red dots and instead sporting a distinctive blue hue on the gill plate. While wild populations of both rainbow trout and brown trout exist in the state, neither are originally native to the Southern Appalachian Mountains, and were brought over as a result of habitat degradation that caused a decline in native Speckled Trout populations.

The last species of trout that can be found in North Carolina is the rare hybrid of either strains of brook trout and a brown trout which when spawning on the same redd result in the creation of a Tiger Trout. Tiger Trout are sterile hybrids with distinct markings that resemble that
of a brook trout, depending on which strain of brook trout was bred.  I have caught Tiger Trout with both the characteristics of Northern Strain Brook Trout and Southern Appalachian Speckled Trout.

Stocked trout, given the name, are raised in hatcheries before being released into waterways. The way to differentiate between stocked and wild trout is most commonly done by appearance. Stocked trout are often, to be frank, ugly looking critters often displaying missing fins, deformed facial structures, and muted color schemes. Wild trout are considerably more attractive, featuring full healthy appendages, no unnatural deformities, and boasting beautiful, vibrant markings and patterns.

I’m saving my thoughts on the ecological ethics of stocking, non native fish populations, and other problematic issues occurring in our waterways for a future article. However, if you are new to fishing for trout, I hope this serves as a guide to help educate yourself on the different categories that can be found in Western North Carolina.

Thanks for reading! To contact Southern Appalachian Anglers to book a guided fishing trip in Asheville, NC call 828-691-1506.