How to Ethically Handle Trout

The varying trout species that are found in Western North Carolina are the quintessential essence of what makes our fisheries here so special. In order to keep the trout fishing here as best managed as possible; it’s important for all anglers regardless of whether you spin fish or fly fish to proper catch and release practices to ensure that fish are in good condition after the fight is over. I’ll touch on some basic tips that can help to better the chances of a trout’s survival through proper fish handling techniques by going through the process of landing, unhooking, photographing, and releasing a trout.

If I could pick one essential tool that makes handling trout a breeze, it would be a good landing net. A quality net is able to accommodate trout at least to the 25” mark, has a wide opening, and is made of rubber instead of rope material. Wet rubber will help to keep the delicate slime layer on the fish that protects it from bacterial infections in the water.

Once the fish is in the landing net, the trout needs to be left in the water while in the net. A critical rule in trout handling is to leave the fish in the water as much as possible. Trout build up lactic acid in their bodies just like we do whenever we’re put into a stressful situation that deprives our bodies of oxygen. Toxic levels of lactic acid build up can occur from fighting a trout for too long along with leaving the fish out of the water for more than ten seconds at a time. Studies have shown that rainbow trout’s gills can begin to degrade after even seconds out of the water. Just because a trout may swim off after being released doesn’t always ensure that it’s body has flushed out the lactic acid, and often many trout die after being released from this unfortunate consequence. Simply leaving the fish in the water and allowing for its gills to move to process oxygen can diminish lactic acid build up significantly.

Use barbless hooks and carefully remove the hook while being as gentle on the fish as possible. Do NOT squeeze or grab the trout by the lower jaw at any point and time! This can cause detrimental internal bleeding and can also break the jaw of a trout, inhibiting its ability to breath and feed properly. Again, leave the fish in the net and in the water while removing the hook. 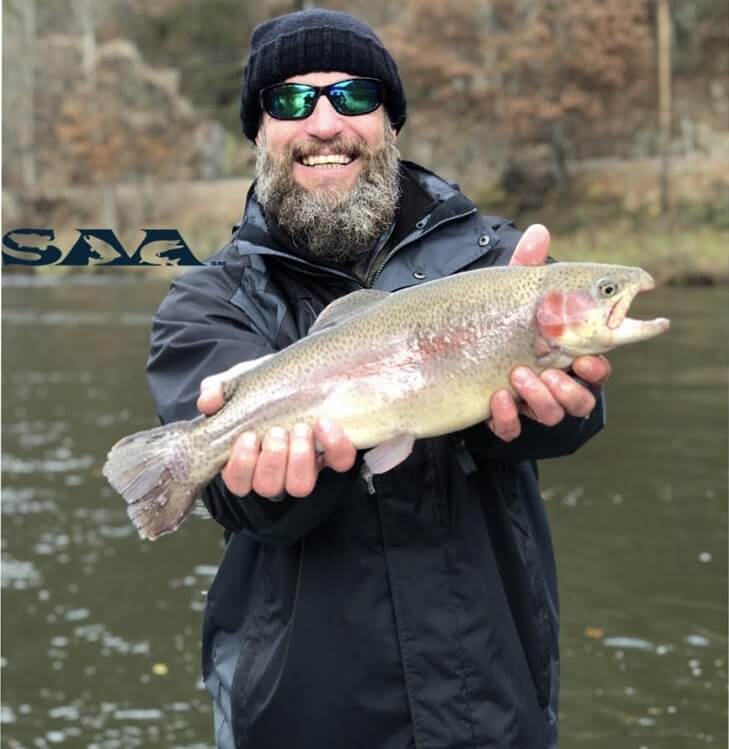 Photographing a fish is a touchy subject. I love fish pictures as much as anyone, but I think more big trout are killed during this process than any other point and time simply because a fish is left out of the water for too long. Remember the ten second rule, gently cradle the fish just behind its front fins with one hand and just in front of the tail with the other to help support the body of the fish. A good fish picture should also show water dripping from both your hands and the body of the fish itself. Wet hands and a wet fish will help to protect that delicate slime layer mentioned earlier. I’ll also reiterate here, do NOT squeeze the trout or lip it by the lower jaw!

When releasing the fish: make sure that it’s in calm water away from clouds of silt or dirt that have been stirred up on the bottom of the streambed that could potentially clog it’s gills. Do NOT move the fish back and forth by the tail before letting it go. Contrary to popular belief, this motion will actually inhibit a fishes gills from processing dissolved oxygen and make it harder for the fish to revive itself. Hold the fish upright in the water and allow for it to swim off under its own power. A good sign of a healthy release is to watch for the movement of the gill plates pushing water through its gills, along with the gills being dark red in color.

A good rule of thumb is to try and keep this entire process to less than a minute. If you follow these steps, you can help ensure the future of our fisheries here in Western North Carolina along with helping to give these special fish the respect they deserve. If you’re still unsure about any of these guidelines or have any questions: contact myself and Southern Appalachian Anglers. We’ll be happy to help make your catch and release practices as ethical as possible.

Contact us online or call 828-691-1506 to learn more about our guided trout fishing trips right here in Asheville, North Carolina!

We use cookies on our website to give you the most relevant experience by remembering your preferences and repeat visits. By clicking “Accept All”, you consent to the use of ALL the cookies. However, you may visit "Cookie Settings" to provide a controlled consent.
Cookie SettingsAccept All
Manage consent

This website uses cookies to improve your experience while you navigate through the website. Out of these, the cookies that are categorized as necessary are stored on your browser as they are essential for the working of basic functionalities of the website. We also use third-party cookies that help us analyze and understand how you use this website. These cookies will be stored in your browser only with your consent. You also have the option to opt-out of these cookies. But opting out of some of these cookies may affect your browsing experience.
Necessary Always Enabled
Necessary cookies are absolutely essential for the website to function properly. This category only includes cookies that ensures basic functionalities and security features of the website. These cookies do not store any personal information.
Non-necessary
Any cookies that may not be particularly necessary for the website to function and is used specifically to collect user personal data via analytics, ads, other embedded contents are termed as non-necessary cookies. It is mandatory to procure user consent prior to running these cookies on your website.
SAVE & ACCEPT